Home Uncategorized My first travel to France since Corona

My first travel to France since Corona

Tuesday, July 7, I traveled to Creuse, Limousin, France. After all the hassle about Corona, I now wanted to experience for myself how thing are going on Creuse Nature and what happens to me during the journey there. 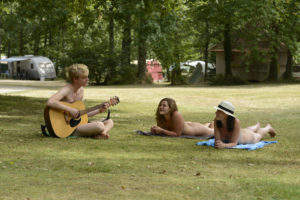 On a windy day full of showers, I drove from Utrecht in The Netherlands where I live, by car to Lille in France. I had previously heard of concrete blocks on the roads to and from Belgium. And last time, I myself witnessed how France’s customs diverted me at the border and spied from all sides. But this time no sign of life on either border.

Because I drive electrically with a range of about 400 km, I had to charge in Lille. The chargers there are situated next to a nice Ibis hotel near the airport, where I had been before. It is never busy there and on the grass I walk straight into the bar of the hotel. Inside I was immediately addressed: if I wanted to wear my mask! Once seated, you can take it off. But even when I wanted to go to the toilet in between, I saw from the waiter’s frantic look that it had to be turned on again. Urination with mouth mask: a new experience…

I looked up to Paris. At home I had read in the newspaper that there is quite a lot of Corona there. In Utrecht I sometimes find the hustle and bustle on the street almost as usual, so from a metropolis like Paris, I had a bad feeling. But I also had to load there. This time, the chargers stood next to a large shopping center in Thiais, a suburb on the south side of Paris. Initially, I planned not to leave the car. But such a charge takes 30 minutes and that morning I had only had one cup of coffee. From my car I could see that the main entrance to the shopping center was divided into a right side for pedestrians entering and a left side where shoppers came out with full bags. That looked quite orderly and I decided to take the chance.

Behind the large entrance doors to the mall, I was stopped by the security officer standing there. Here also a face mask was mandatory! But mine was made of paper and I threw it away after use in Lille. So I had to ask him where I could buy it? He showed me the third shop on the right. Inside the mall. A child walked here and there from the inbound to the outbound line, but visitors generally followed the designated walking routes. Better than on “my” Oudegracht in Utrecht: since a month we have had one-way pedestrian traffic on Saturday and Sunday. But even with a force majeure of traffic controllers, it is still impossible to keep visitors to the inner city in this harness! 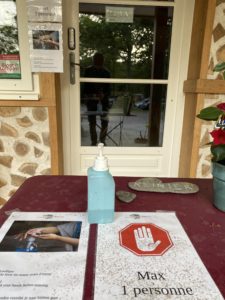 Upon arrival at the campsite, I came across a table with hand alcohol and an instruction in 3 languages. Only 1 person at a time was allowed in the Accueil and if you wanted to disinfect your hands before entering. 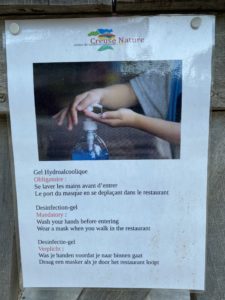 With a big smile and big elbows I was greeted and told Els and Reinier, the owners of Creuse Nature, about my travel experiences so far. They told me that their campsite was now half as full as other years this time around. That sounded better than the one guest they had in mid-June. Many volunteers had also canceled, so they now employ more people than usual. I realized that 2020 would be a bad year for them financially anyway.

Whether I had already eaten (“Yes!”) and perhaps I wanted a beer before I tiredly looked up and furnished my mobil-home? The other order seemed better to me.

My mobile home was open and looked spic and span. I freshened up and went to the bar. 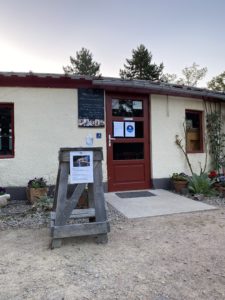 Hey, another table with a warning sign … At the bar, two somewhat debauched people kept the bartender from his job. There was no more “people”. Those two (three?) had a great time together. They drew me closer than I thought would be wise, but when I took my distance it became “obvious!” accepted.

As I am used to at my age, I had to go to the toilet after the second beer… 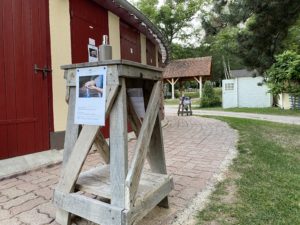 The next day I informed Els about my experience in the bar. They also entered the bar shortly after me yesterday. She was also amazed, determined to speak to those involved about their behavior and asked me to suspend my judgment until after today.

The day went on quietly. It was sunny and became about 30 degrees celsius. The expectations for the next 2 weeks were also good! I thought that was a great relief after the 2 weeks of wind, showers and fresh air, which I had to choose in Utrecht. I had already brought some stuff for the Music Week in August, unloaded it in the attics of one of those beautiful houses “Au bois cordée” and got to know the temporary residents.

That evening I went to dinner in the restaurant of the campsite. Outside on the terrace was covered. Tables were widely spaced. At every table one person or “household” was seated. So I sat alone. Two people served pleasantly and effectively. They were dressed and wearing face masks. I knew one of them from last year. Her colleague said he had arrived at the end of his sabattical and was looking for what he wanted to do later in his life. How often I quickly have personal conversations with strangers at Creuse Nature! I felt carefully treated and safe. 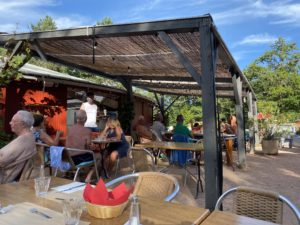 In the meantime I returned home. I feel safe and sound now. My wife warned that Corona can take 1-2 weeks to appear. But I felt better treated than at home, in Creuse as well as on the way! And if something comes up within 2 weeks, you’ll be the first to know. John Miltenburg, 14 juli 2020.